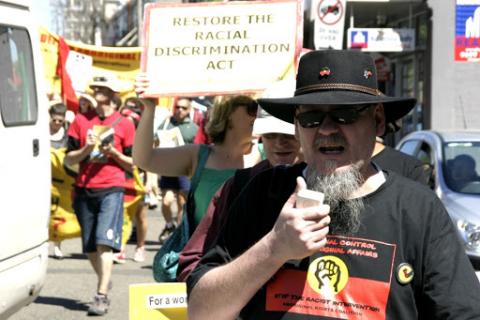 The Aboriginal Rights Coalition (ARC) was established in response to the Northern Territory Intervention, announced by the Federal Government in June 2007.

The ARC developed from the experiences of siblings Cathy Eatock and Greg Eatock, who had previously been active members of the Committee to Defend Black Rights (CDBR) from 1986-1993, which successfully campaigned for a Royal Commission into Aboriginal Deaths in Custody in 1989.  The CDBR was a national political campaign of families of those who had died in police or prison custody.  The CDBR had a core central Aboriginal organising committee that included Hellen Corbett (nee Boyle) who was the Chairperson, Cathy Eatock was the National Secretary and Greg Eatock fulfilled the role of Media and Campaign Spokesperson. The CDBR held rallies, four national conferences and presented at the United Nations.

It was following the second of these international presentations by Helen Corbett, the CDBR Chairperson, that the Royal Commission was announced by then Prime Minister Bob Hawke. The Government, concerned at their international reputation and international attention on the high rate of Aboriginal deaths in custody, announced the Royal Commission, after three years of national protests had previously failed to get a response.  Like the CDBR, the ARCA is an Aboriginal organisation that provides associate (non-voting) membership to non-Aboriginal people who wish to actively support the ARCA campaigns.