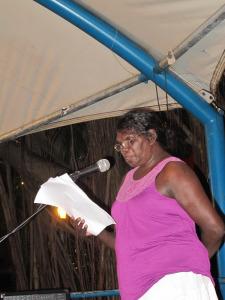 The Darwin Aboriginal Rights Coalition (DARC) was formed in response to the introduction of the Norther Territory Emergengy Response (NTER) otherwise known as The Intervention.

DARC is an open collective of Aboriginal and non-Aboriginal people committed to the repeal of the NT Intervention and the struggle for Aboriginal self-determination.

No More! Enough is Enough!

Once again, they have gathered to openly discuss the future of our generation who have been subjugated by the lies and innuendo of the Federal Government, set out in the Stronger Futures document (October 2011).

The Stronger Futures report has created a lot of anger and frustration due to the lack of process and the ignorant way in which the views of the people have been reported. we therefore reject this report.

We will not support an extension of the Intervention legislation. We did not ask for it.  In fact we call for a genuine Apology from the Federal Government for the hurt, embarrassment, shame and stigma,  and for the illegal removal of the Racial Discrimination Act.  It is our intention to officially call upon Government for reparation.

The recent consultations report shows that Government has failed to take seriously our concerns and feelings. This report is simply a reflection of pre-determined  policy decisions. This is shown clearly by the absence of any commitment to bilingual learning programmes as well as the proposal to introduce welfare cuts and fines to parent of non-attending school children. Once again a punitive policy that is neither in the best interests of the child or the family.

Blanket measures have been central to the Northern Territory Intervention and have been the source of much distress. Where there are problems, they must be addressed on a case by case basis and preferably with the assistance through the appropriate community channels.
Since August 2007 till 2011, more than 45,000 First Nations Peoples living in the Prescribed Areas were traumatised when a Bill was passed through both Houses of Parliament (The House of Representatives and the Senate).

This legislation suspended the Racial Discrimination Act 1975 to put in place the Northern Territory Emergency Response. The Australian Greens were the only party to oppose the legislation.

These actions have placed Australia in breach of its international treaty obligations to the First Nations Peoples. Respectful discussion and negotiation with community elders did not take place  before the introduction of the Intervention.

Discussions on a diplomatic basis are essential. There are elders in every Aboriginal Nation invested by the authority of the majority. These are the people with whom Minister Macklin should be negotiating, rather than with the chosen few, as has been her habit.

There has NEVER been acquiescence in the taking of our lands by stealth. Aboriginal people are sovereign people of this Nation. The process that will lead to legal recognition of customary law should be immediately commenced.

We believe that there should be an honest and comprehensive treaty negotiation with the Australian Government and facilitated by the United Nations.

We have a right under international law to self determination and after almost five years of the oppression of the Intervention,  we demand that Government hand back to us control over our communities and provide adequate Government, long-term funding  to ensure the future of Homelands.
Communty Councils have suffered from years of underfunding. The same is happening today with the Shires that have been imposed on us. There is a lack of funding for our Core Service.There is no capacity for Aboriginal communities to  engage in long-term services planning  without the certainty of long-term funding.

We have had enough! We need our independence to live our lives and plan our futures without the constant oppression and threats which have become central to the relationship between Government and Aboriginal communities in the Northern Territory. We will not support policies that have not been negotiates with all elders of Prescribed communities and we will not support an extension of the Intervention, or an Interventionunder other names.

Since the Apology and since reconciliation, the level of incarceration of Aboriginal men has increased three-fold; our families are being punished for failure to attend a foreign school design; our capacity to govern our own lives has been totally disempowered; Aboriginal youth suicide rates in the Northern Territory are higher than anywhere else in Australia; and our people have been demonized, labelled and branded. This is not what an apology is and it is not reconciliation. These outcomes are the very opposite to their intent.

Australia is in breach of its international treaty obligations to the first nation’s people through it membership to the United Nations in the elimination of racial discrimination.

We as leaders of the Northern Territory acknowledge other peoples’ views. We acknowledge that some may agree and some may disagree with parts or all of the ‘intervention’; whatever the name the Government chooses to call it. The only right we now have left is to remain silent.We as Aboriginal people call on the international community to hold Australia to account for its continuing crimes against humanity for its treatments of its first nation’s people. Again, we say to our visits by the Minister’s department; this is not consultation. Proper consultation is about listening and inviting and including the views of Aboriginal and Torres Strait Islander people. Consultation is about outcomes that are progressive and agreeable to all parties.
The future is based on our children having a quality education, but to date this continues to be a systemic failure. A quality education for our people needs to include:

Curriculum needs to change and reflect traditional knowledges not just for Aboriginal and Torres Strait Islander children, but importantly for the broader Australian population who know very little about their own first peoples.
Aboriginal teachers need to be treated fairly and equally to their non-Aboriginal counterparts in delivering quality education to our children. This includes the opportunity to tell oral stories of Kinship, Creation Stories, and about important cultural knowledge and skills. Failure to accept these views and work seriously toward their inclusion will simply mean more of the same.