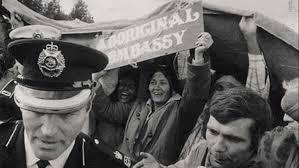 Embassy stalwart Lyall Munro, below, leads protesters at the Canberra Convergence opposing the NT Intervention, especially the setting aside of the Racial Discrimination Act. The convergence took place on 12 February 2008, the day before the National Apology to the Stolen Generations. Photo by Wayne Quilliam, for the Koori Mail

A lasting symbol of Indigenous unity

On a cold and rainy morning 40 years ago, four young Koori men erected a beach umbrella on the manicured lawns outside Parliament House in Canberra and dubbed the modest structure “the Aboriginal Embassy”.

In doing so, they sent a blunt and powerful message to politicians, the media and news watchers around the country and the world: That, although the then McMahon Liberal government had effectively rendered them landless, Australia’s First Peoples had never ceded their sovereignty. And that Australia – with its violent colonial past and the ongoing dispossession, discrimination and disadvantage experienced by many Aboriginal people – had a black history.

Only one of those four men, Michael Anderson, will be at the Aboriginal Embassy (or the Aboriginal Tent Embassy, as it has since become widely known). Tragically, the other three – Billy Craigie, Bert Williams and Tony Coorey – are gone, a stark reminder that even today black Australians can generally expect to live much shorter lives than their fellow, white Australians.

But their legacy will live on, with thousands of people expected to make the pilgrimage to the nation’s capital to mark 40 years of the Embassy, making it Australia’s longest standing site of political agitation.

Amongst the crowd will be others who were there in the very beginning, and their descendents. And, like 40 years ago, there’ll be supporters from the unions, churches, student bodies and more.

The efforts of those behind the Aboriginal Embassy will also be remembered at Sovereignty Day, Invasion Day, Survival Day and even Australia Day events elsewhere around the country.

“The Embassy has played a huge role in the introduction of Aboriginal Land Rights and the struggle to end racial discrimination in this country,” Pat Eatock’s daughter Cathy, now a member of the Aboriginal Tent Embassy 40th Anniversary Organising Committee, said.

“There really is no equal in terms of an Aboriginal icon. The Embassy is an international symbol for Aboriginal and non-Aboriginal people alike.

“When you think about the path Land Rights has taken in places like the Northern Territory and the successful model that now operates in New South Wales … that was all born out of the Embassy.

“It’s these sorts of advancements that have helped shape the lives of Aboriginal people for the better, and it all began with four young Aboriginal men camping under a beach umbrella 40 years ago.

“I think we need to remember also; the Aboriginal Tent Embassy site is a living one. Activists have manned the site permanently for many, many years. This year’s Corroboree for Sovereignty is also in honour of their continuing fight for Aboriginal justice and a tribute to their tenacity.”

Over time, the Aboriginal Embassy has also inspired others elsewhere, including at Mrs Macquarie’s Chair on the Sydney Harbour foreshore in the lead-up to the 1988 Bicentenary, Sandon Point on the NSW south coast, Victoria Park at the University of Sydney, and in Brisbane and Melbourne.

Since 1992, when the Embassy was formally re-established in Canberra, the site has weathered both political and literal attacks, as well as criticism from within the Aboriginal community.

Some local traditional owners of the Canberra region have objected to the Embassy’s appearance, insisting that it disrespects them. Respective governments have conducted reviews on the site’s future and made varying proposals, from replacing the Embassy with a presumably more palatable information centre to getting rid of it altogether.

Even when the Aboriginal Tent Embassy site was registered on the National Estate by the Australian Heritage Commission on April 9, 1995, the then federal Opposition spokesman for Regional Development, Senator Ian Macdonald, said he found the listing “incredible” declaring that “nothing should be done to make permanent that collection of ramshackle and illegal buildings”.

And over time, cowardly arson attacks have damaged or destroyed some key buildings and other structures on the site.

Nevertheless, the Aboriginal Embassy today remains a lasting symbol of Indigenous unity on land rights and sovereignty. And it has morphed into a broader platform to protest, campaign and lobby in relation to other issues too.

Ongoing disadvantage in health, housing and child mortality, discrimination and racism, deaths in custody, mining on Aboriginal land, native title, threats to Aboriginal heritage and sacred sites, the mainstreaming of Aboriginal programs and – most recently – the Northern Territory Intervention have all been dissected and passionately debated there. Current moves to recognise Aboriginal and Torres Strait Islander people in Australia’s Constitution will no doubt get the same treatment.

In the past, some amongst the Embassy “old guard” have expressed concerns that the vision of the place has been lost or the fire in the belly has gone out in some Indigenous people. During the Embassy’s 20th anniversary celebrations in 1992, Michael Anderson ventured that some Aboriginal people would describe him and other activists as “just troublemakers” or “leftovers from the 1960s and 1970s”, criticising them for “not advancing our thinking”.

“The trouble is our way of thinking back in the 1970s, which put this Embassy up, hasn’t been caught up to by the rest of Indigenous Australia,” Anderson told the Koori Mail back then.

“I think the sad thing is that not enough Aboriginal people in this country are as politically aware as they were in the 70s.”

There can be no doubt that the Indigenous political landscape in Australia has changed markedly in the past four decades. And there are plenty of people who argue that the fight has become more sophisticated and nuanced than in days gone by. But no matter whether that fight is fought in the streets, boardrooms, sporting fields, or parliamentary chambers, those stepping up should know and respect our collective history.

The 2012 National NAIDOC celebrations will also honour the 40th anniversary of the Aboriginal Tent Embassy, with the theme Spirit of the Tent Embassy: 40 years on.